Inflation is killing your buying power 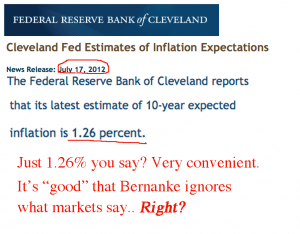 The point is that anyone who thinks inflation is tame is full of shit.

Governments lie. They always have and they always will. A bear will kill and eat you given the chance. Always have and always will. But you're not angry at the bear, right? Go with the flow. No one is ever going to change the dynamics of government. They will lie. Period. The government consists of politicians. And politicians lie for a living. If one is to be frustrated, be frustrated with the fat, stupid and lazy "citizens" of this country. They put these liars into office for the gains of cronyism or out of apathy. Indeed we do get the government we deserve.  No wonder one third of Americans are obese. The crap we are shoveling into our bodies is on par with the misinformation, propaganda and lies that are being programmed into our minds by government bureaucrats, corrupt politicians, corporate media gurus, and central banker puppets. No one could ever accuse the American people of being perceptive, realistic or critical thinking when it comes to economics, math, history or distinguishing between truth or lies. Our government controlled public school system has successfully dumbed down the populace to a level where they enjoy their slavery and prefer conscious ignorance to critical thought.

The Dow is reported in nominal terms, that is why it is up. Try looking at Dow/S&P adjusted for inflation or priced in gold. Last time I looked, the S&P adjusted for inflation was down 40% since 2008.  And it's not only the United States.  Look at food prices across Asia. Look at housing prices in Hong Kong. Look at fuel prices in Nigeria. Look at heating costs in the UK. Look at gold.
at 8/14/2012 10:56:00 AM