First, you have the encouragement of  American women to abort and abort some more..
Then you import illiterate immigrants to make up for the labor shortage.
What could possibly go wrong?
at 10/31/2018 12:55:00 PM No comments:

The Caravan of Crapola

Where do they shit?
The Hondurans in the caravan, the 7,000 people walking north to America, where do they go to the bathroom?
And eat and sleep and store their clothes?
And how is it that after a week on the road they are clean and their hair and clothes are well kept?
How is any of this possible?
And why do these people, supposedly fleeing intolerable conditions in their homeland, carry little flags from their homeland and break into its national anthem when the TV cameras show up?
And speaking of which, for oppressed people, they all seem to be pretty well fed, well groomed and well dressed. Their hair is neat and newly cut, their clothes are clean and in good repair, and they are built like people who have had ample nutrition all their lives, being well developed and, many of them, overweight.
And none of them look dirty or unkempt, like they had been sleeping on the ground for the last week.
There’s just nothing in any of this that makes sense.
Supposedly, these several thousand people spontaneously decided to leave Honduras, walking north in a group, hoping to trek the length of gang-plagued Mexico and present themselves as refugees and prospective Democrats at the American border.
Which, again, makes no sense whatsoever.
And leaves a lot of big questions unanswered, and ignored by the press. Such as, who organized this? Who is paying for it? How have they covered 500 miles in a week?
Seriously. Any number of American “reporters” have walked beside a sympathetic walker and talked about how this particular woman and her children had trekked half a thousand miles over the last week or so.
That’s 71 miles a day.
The best soldiers through history have been able to march 25 miles a day.
How have 7,000 people been fed and watered? And how have they gone to the bathroom? If the average person across the world produces about a pound of solid waste a day, that means that these folks are somehow disposing of more than three tons of feces each day.
That’s a heck of a lot of crap, even for a Central American roadway.
Provisioning such an army of people – the equivalent of 10 combat battalions in most of the world’s militaries – is a large task. Transporting and distributing the food and water necessary to keep those people moving is a massive chore which the press says nothing about.
The entire enterprise, as a spontaneous ad hoc event, is implausible.
As an orchestrated international attempt to influence an American election, it starts to make sense.
And ought to alarm us.
Unless it’s only Russians we don’t want screwing with our democracy.
Unfortunately, none of this has made the evening news. It’s almost as if the press, in whatever scheme is afoot, gladly accepts its role as propagandists to the American people.
Every story is sympathetic, as if an attempt to enlist viewers and readers in this caravan and the politics it symbolizes.
And so the story is not about an orchestrated attempt to manipulate electoral opinion and violate the borders and laws of the United States, it is about compassion and Trump and xenophobia and racism. It is the October surprise, it is the Blue Wave.
And it is all nonsense.
Because all of these people, if legitimate, have the ability to apply for American asylum in their own country – as do the residents of most nations of the world. We have consulates and embassies for a reason, and this is one of those reasons.
We also have laws and an oath of office for a reason.
Laws, so that “we the people” through our elected representatives clearly and systematically govern our society. Law is the means by which the people express and exercise their sovereignty. Disobedience to law is disobedience to the will of the people, it is the subverting of their sovereignty and franchise.
Breaking the law is denying you the vote. Your vote elects representatives – lets you pick the country’s direction – and the representatives write the law. If that law is ignored, your representation becomes meaningless.
You get screwed.
And the oath of office?
Members of Congress  swear an oath to “bear true faith and allegiance” to the Constitution, which establishes our system of laws and specifically charges the Congress with making the rules of naturalization and immigration.
Who comes across the border and under what conditions they can stay is a constitutional responsibility of the Congress That is to be determined by a congressional vote, not by a Honduran mob.
Failure to insist on that  is a violation of your congressman’s oath of office.
So there is not a Democrat or Republican response to this travelling army of invaders – there is only an American response.
And that is: Turn around and go home.
Because the law of the United States does not allow a mass entry like this. The law does not declare the borders open.
If Democrats and progressives don’t like that, they can try to change the law. If America’s progressives want open borders and believe all the world’s people have a right to live in the United States – as they say they do – then they should adjust immigration law accordingly.
But until then, if they are to keep their oaths of office, they must stand for the law and the border.
And they must tell their surrogates to turn around and go home.
Because this caravan is nothing more than a bunch of political shit.
at 10/31/2018 09:40:00 AM No comments:

The teacher asked the class to use the word “fascinate” in a sentence.
Molly put up her hand and said, “My family went to my granddad's farm, and
kwe all saw his pet sheep. It was fascinating."
The teacher said, “That was good, but I wanted you to use the word ‘fascinate,’ not 'fascinating'.”
Sally raised her hand. She said, “My family went to see Rock City and I was fascinated.”
The teacher said, “Well, that was good Sally, but I wanted you to use the word ‘fascinate’.”
Little Johnny raised his hand, but the teacher hesitated because she had been
burned by Little Johnny before. She finally decided there was no way he could
damage the word “fascinate,” so she called on him.
Johnny said, “My aunt Carolyn has a sweater with ten buttons,
but her tits are so big she can only fasten eight!”
The teacher sat down and cried.

Elizabeth Warren. ALL you need to know for her Presidential campaign.

The Daily Caller's Benny Johnson laid out the Elizabeth Warren fraud in a 10-part tweetstorm which, in a rational world, would end the debate.

Every Time Elizabeth Warren Has Lied About Her Native American Heritage:

1. Elizabeth Warren self-identified as a "Native American" in the The Association of American Law Schools Directory of law professors in every edition printed between 1986 -1995.

Replying to @bennyjohnson
2. After becoming a professor at the University of Pennsylvania, Warren demanded the University change her faculty listed ethnicity from “white” to “Native American.”

Replying to @bennyjohnson
3. Warren was identified by Harvard Law as a “woman of color.” Harvard promoted Warren’s hire as expanding their campus diversity by hiring a woman with "minority background" onto their faculty. 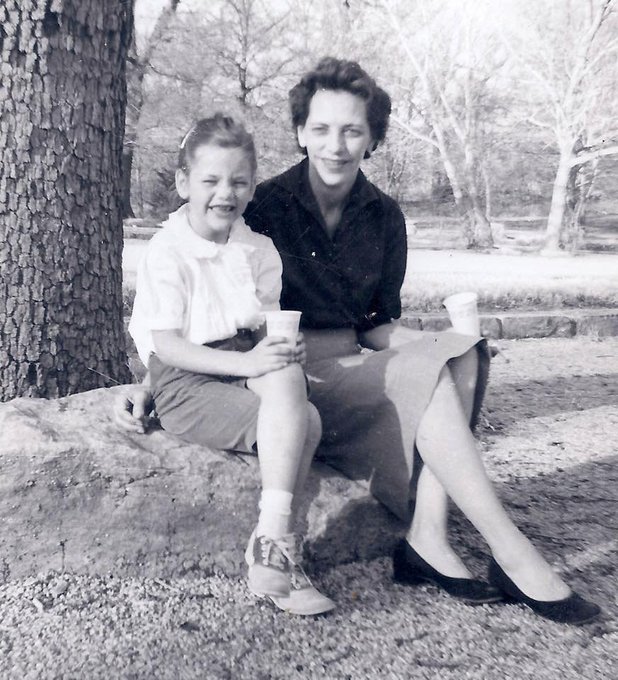 Replying to @bennyjohnson
4. Warren claimed that her mother and father had to elope due to her mom’s obvious Indian heritage and the white bigotry of her father’s family. Here is a photo of Warren's mom: 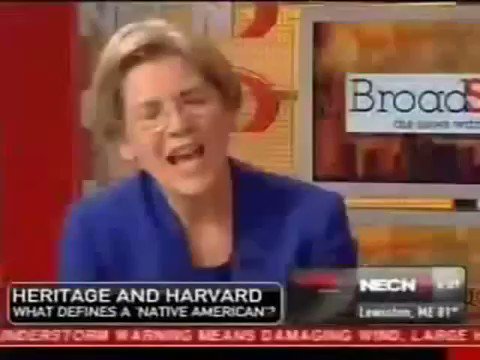 Replying to @bennyjohnson
Here is video of Warren telling this story: "My mom and dad were very much in love and they wanted to get married. My father's parents said 'Absolutely not because she's part Cherokee and Delaware.' After fighting it they eloped." 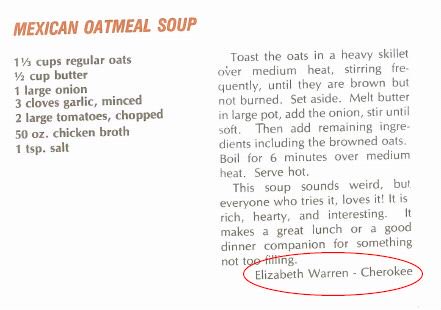 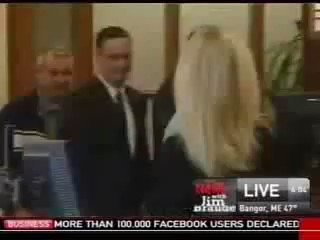 Replying to @bennyjohnson
6. Warren used offensive, racially charged language to defend her claims of Native American heritage, declaring that her family had “high cheekbones” like “all the Indians do.”

Here is video of that moment:

Replying to @bennyjohnson
7. Warren has now claimed that she *may* have 1/1024th Indian DNA. This is equally problematic since DNA science proves that the average white American has .18% Indian DNA, far more that Warren's .098% (lowest estimate according to study) https://dailycaller.com/2018/10/15/elizabeth-warren-less-native-american-dna/ …

In the absence of documentation, Elizabeth Warren’s link to any Native American tribe is a matter of narrative inheritance or folklore, as she puts it. On this subject, Warren’s extended family has...
bostonglobe.com 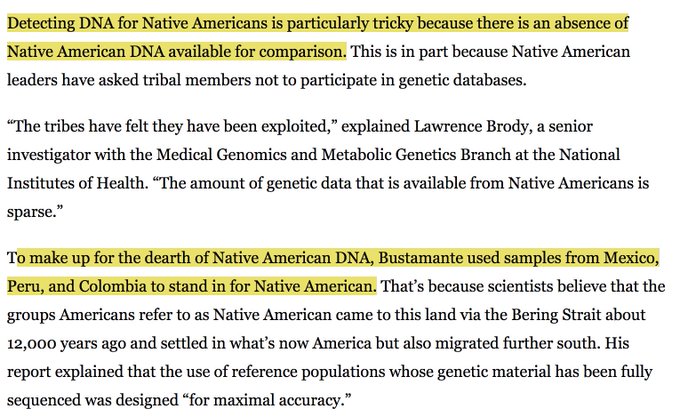 Replying to @bennyjohnson
9. Warren's DNA report did not measure actual Native American DNA. The report actually measured Colombian, Mexican and Peruvian DNA. Of which Warren *may* have a tiny, tiny fraction - possibly.

Replying to @bennyjohnson
10. It is very difficult to argue that Warren did not commit racial fraud. She used the advantages in the system to advance her career with no evidence (to this day) that she is actually Native American. Democrats defending her behavior on this point is dubious - at best.