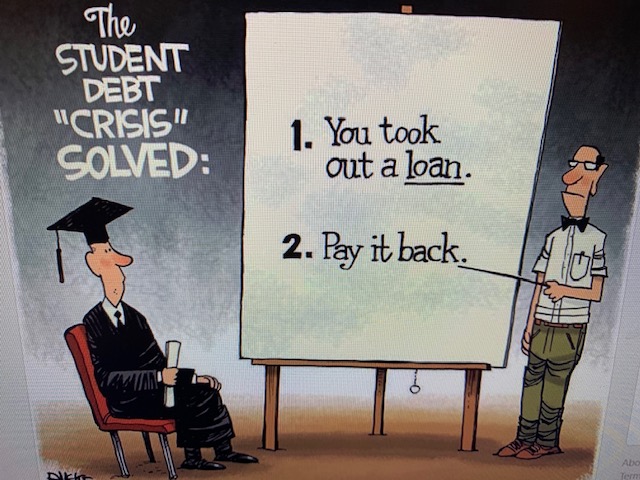 The Language of TRUMP

Excuse me Sit down As you know Very soon Very big Never seen before Nobody talks about it Everyone talks about it You'll see We'll see Very, very quickly That I can tell you
at 6/24/2019 07:29:00 AM

It’s an innovative strategy that totally and permanently resolves this problem in a new and exciting way.
Ready?
Here goes.

How about you pay your own student debt?

That’s it. It’s as elegant as it is simple. You. Pay. Your. Own. Debts.
If you follow this bold, one-step program – the one step is you paying your debts – then you will eventually be debt-free. And best of all, I won’t have to pay any of your debts.
See, a lot of Democrat politicians are promising “free college,” but what they really mean is “free for you.” Someone has to pay, and that someone is me, and I need to level with you.
I am not interested in paying for your college.
Now, some may call me “greedy” or “selfish” for not wishing to work and then have the money I earned taken from me to provide things to you that you want but did not pay for instead of being able to spend it – the “it” being the money I earned – on things that I want. I am okay with that. I would much prefer having people who fundamentally misunderstand the concepts of greed and selfishness call me “greedy” and “selfish” than subsidize their educations, educations that evidently did not include learning about basic concepts like greed and selfishness.
I understand that your priorities for my money may differ from mine, but it being my money, my priorities should take precedence. Here is a short, partial list of things that I prioritize for my money over paying off your student loan debts:

Now, those who support the idea of taking my money to give it to someone else so that someone else can have things he, she or xe wants rarely put it so bluntly. It’s never, “Well, I want this education but I don’t want to do the things necessary to pay for it. I want you other people to do the things necessary to pay for it.” Instead, it’s always put in some other way that makes them taking our money to spend on things they want appear as a favor to us, the people expected to do the work.
For instance, sometimes they say that us working to give other people free stuff is an “investment.” Again with the not understanding what words means, because where I come  from, you can rest assured that is not an investment.
Traditionally, with an investment, one gets a return on investment. No one ever explains what my return on investment for Kaden’s Marxist Puppetry degree might be, other than an occasional latte which I would still have to pay for. I prefer that I instead determine how to invest my own money in order to benefit myself, which I do not see as unreasonable since it is my money. Which I earned by working.
This is the beauty of my one-step student loan plan. It puts all this controversy aside. Pay your own student loan off. That’s it. End of discussion. Now get to work.
Note that I am not pointing out how I managed to fund my own education without asking strangers to chip in – actually, without forcing them to chip in, because if you don’t pay your taxes designed to fund “free college” people with guns will come to haul you away. The argument that “I paid for mine so you should pay for you own” is valid, but we need not even reach it. No one should ever be forced to give other people free stuff. It’s my money, and that’s reason enough why you can’t have it.
at 6/01/2019 09:31:00 AM