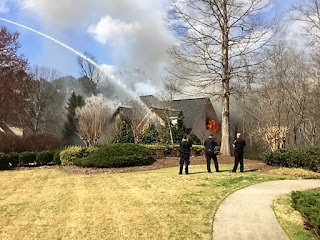 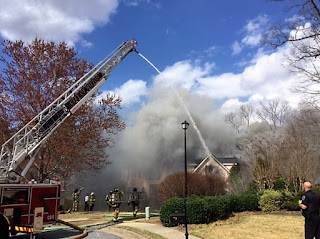 Living in a suburb is something that I never envisioned growing up.   I grew up in tiny towns, very tiny, very rural, very poor.   I was one of the first persons on-scene at this tragedy yesterday.  On a beautiful day in Georgia there were lifetimes of memories destroyed.  Respect fire.  Respect life.


MILTON, GA -- The son of a Milton homeowner has been charged in connection to a fire that significantly damaged the family home.
Milton fire investigators have arrested and charged Joseph Allen Dusek with first degree arson following the Monday afternoon fire.
Milton Fire Rescue crews responded to a call of a fire around 3:10 p.m. March 14 at a home on Highland Oaks Court. A motorist on Hopewell Road, which sits to the east, noticed the fire and called 911, said Deputy Fire Chief Mark Stephens.
No one was home at the time of the fire, and no injuries to civilians or firefighters were reported. Stephens said the fire appeared to have been "intentionally set, and the interior of the house suffered major structural damage."

Milton fire investigators arrested and charged Dusek with first degree arson, Stephens added.  Stephens said Dusek is the adult son of the homeowner, and the motive of the incident remains unclear, as Dusek is "not cooperating with the investigators."  Dusek was booked into the Fulton County Jail March 14 where he remains.
at 3/15/2016 03:25:00 PM
Email ThisBlogThis!Share to TwitterShare to FacebookShare to Pinterest