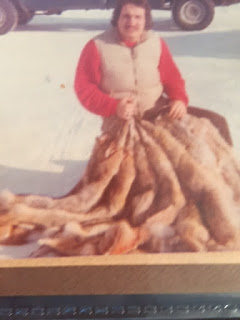 Some pretty fawn killers stretched and dried ready for market.  One of those coyotes was a hybrid of sorts, either a wolf or some very large dog blood in him.  That coyote weighed either 73 or 75 pounds on the scale in the carcass.  We killed him while it was feeding on a dead cow in mid-winter.  Have never seen a coyote close to being that big since.  Reminds me of the female beaver caught north of Cyrus MN back in the 1970's that weighed 85 pounds.  Simply hard to believe if I hadn't held both critters in my hands.
at 3/08/2016 03:34:00 PM
Email ThisBlogThis!Share to TwitterShare to FacebookShare to Pinterest