Not much to say about the state of flying in America these days.  Sitting in a metal tube, five miles high, covering 8 miles per minute knowing that airplane parts were bought from the lowest bidder, well, okay.

Airline employees are just doing their job.  They have to be assholes, it's their job.  They ALL know the bullshit of requiring passengers to wear a mask on the aircraft is just bullshit.  The science is so simple yet the mask diaper storm troopers and face diaper Nazi's are everywhere.

I was sitting in the Denver International terminal this week waiting to board a delayed Southwest Airlines flight to Nashville.  Watching the pilot and his co-pilot come down the stairs from the aircraft and walk to the back of the plane I knew what was coming.   I stood up and stood tall myself.

These two flying cowboys put up the finest, crispest, smartest salutes I have ever seen from the ranks of  commercial pilots.  Wow.  Good on them.  It was impressive.

May God hold the families of this fallen warrior in his hands until they meet again.   Thank you pilots for your respect and carrying this veteran to his final resting place. 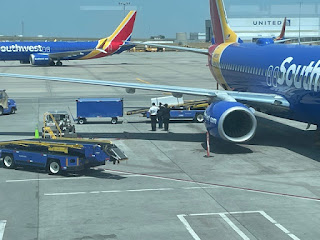 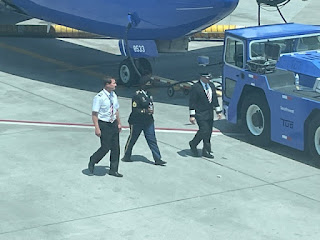