I've been interested in watching birds since about the 2nd grade.  I've been shooting at waterfowl since about the 4th grade.   I had never shot a dove in my life until this summer.  I had clients invite me to dove shoots in Southern California, in south Georgia, I think the in-laws even invited me once to shoot doves in TN.  I remember specifically going dove hunting one time in my life.  I was a senior in high school in South Dakota.  Never shot one that day and that was in the fall of 1971.

My good pal who has hunted far and wide with me over the years found himself at an Alzheimer's Benefit Fundraiser about a year ago.   A few liquor drinks being involved, he put in the minimum bid to go on a dove hunt to Argentina.  When the night was over he had "won" the hunt!   I use the term "WON" here rather loosely, it is what my wife says when we depart benefit fundraisers and I softly remind her it really isn't winning.  The funds still come from the checking account. I bet you know well what I am talking about.

When my pal called to ask if I was "in" to shoot doves in Argentina I was thrilled.   Cheap trip for sure with the Argentinian peso on the ropes!   There were some great guys going and traveling from Dallas via Atlanta to Buenos Aires allowed us to travel together on the same flight.

We are all busy in our respective careers and figured that three days of gunning were enough to schedule.  We were correct in that assumption. It's a long way to Argentina however you decide to get there and flying south late on a Saturday night in the dark gave me a good look at the Cuban coastline and dimly lit cities that harbor the one-sided socialist republic in which political power is vested in the Communist Party. 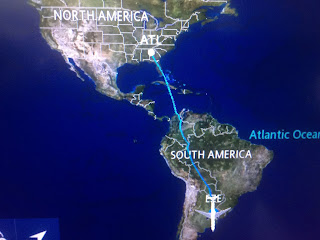 Arriving into Buenos Aires on Sunday morning and a short layover before another flight into Cordoba, Argentina about 400 miles to the north-west of Buenos Aires.  We didn't bring any ammo, we didn't bring any guns.   We "rented" Benelli .20 gauge semi-automatic shotguns for $75 per day and paid $15 for every box of shells we shot.  Airfare round-trip ran about $1,800 and the total cost of my trip outside of airfare was between $2,500 and $3,000.   Lots of friends and acquaintances have asked me what the cost was so I thought I'd include it here.

The name of the outfitter we used was Maers & Goldman out of Cordoba.  The lodging provided was excellent.  The grounds were clean and well-kept. 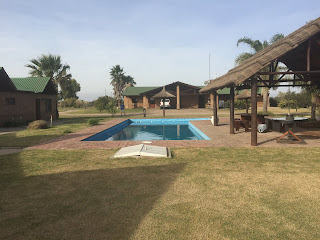 The services provided by staff were outstanding and the food was simply world-class. I wasn't worried about hitting the doves, nobody yet has ever called me a bad shot, probably has something to do with practicing shooting.  I was concerned that  with so many guys gunning week after week, year after year that somehow there wouldn't be enough doves to shoot at.  I. Had. No. Idea.     The number of doves was simply unbelievable. 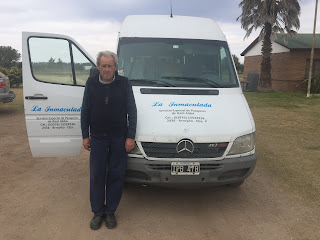 This is our driver.  He always had a smile and could drive that rig through any greasy gumbo back road in Argentina safely.  He always smelled like a liquor drink.  Maybe there was a correlation there.

The first morning we had a great breakfast and board the Mercedes Benz travel van and were taken to the field where we met our guides.   The guide's job is make sure your gun is cleaned every night, to count the number of shells you shoot, to count the number of birds you drop and to make sure everything goes well because his income is dependant only upon the gratuity a hunter gives him at the end of the hunt.  My guide was Marcos. 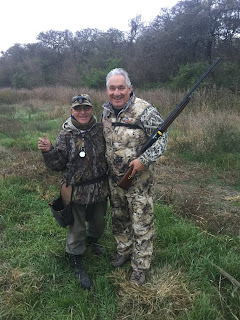 Marcos was probably early 50's, spoke little English, and what English he did speak was very plain, "good shot Dean, good shot" or "swing, swing, swing" when I would miss.   The only exception to that was when I was shooting parakeets he would call them "tweeties" in his own brand of humor.  Marcos could put shells into my shotgun faster than I could.  His fingers were bandaged to protect them from putting thousands of shells into my gun.  Without the shoulder pad I had purchased the trip would have been far tougher.  Ear protection, eye protection, shoulder protection were very important.  I don't know what company manufactured the ammo we used but I had only 1 misfire out of thousands of rounds.

When the birds come off the massive roosts in the morning it was truly a spectacular sight.   Argentina does a couple of things very well.   The country produces soybeans and corn.  They also don't tax the citizens to provide welfare for able-bodied Argentians.  You either work and eat or don't work and don't eat.  Sounds pretty simple.  The SWAMP could probably learn a thing or two in that regard from Argentina! 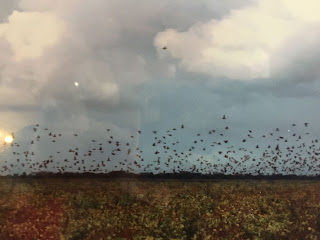 This picture is what it is all about but it just doesn't give the sheer immensity of the birds coming at you.  It seems like there is no end to the number of birds.  How many birds did I shoot?  Alot.  I don't know how many I shot.  The numbers don't matter to me, much like the score on a big deer I might shoot.  I don't care.   Getting your hand burned by touching a smoking hot barrel is always possible!  Marcos was non-stop and I was hammering!


I did enjoy pounding wild parakeets.  They fly at tremendous speed and have the acrobatic ability and speed of a hummingbird.   Farmers have a hard time with parakeets because they make their nests everywhere.  Here is a parakeet nest that disabled a windmill. 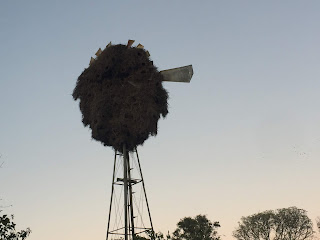 Here are some parakeets I was able to kill. 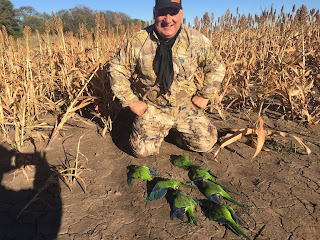 The head honcho of the show, Mr. Goldman has been in the game for 33 years.  He told me there are more birds now than when he started due to the agriculture methods providing more food for the birds.  When the shooting stops in the morning the raptors are moving in to feed on dead birds and the puma's (mountain lions) are coming in the evening to feed in dark of night.  Lion tracks are everywhere in Argentina. 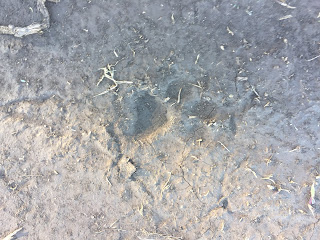 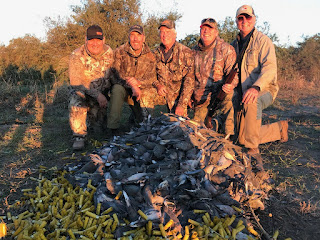 One day the guides picked up our birds.  This is a pretty hefty pile and am not certain how many  birds were in this pile.  We had dove for supper and they were delicious.  The other days the birds were left in the field. Nobody it seems wants to clean and eat dove when Argentinian beef is so common.

Would I do it again, yes.  Would I try to do find a place closer to home, yes.  Mexico has great dove shooting.  Next time I would probably want to do some waterfowl shooting along with the dove shooting.  I liked the opportunity to get into cool weather during the American summer and loved the opportunity the currency devaluation in Argentina provided. The U.S. dollar goes a long way in some places around the world.

One question I need answered is with the dozens of hawks and eagles that swoop into the fields after the daily shooting, and how much lead they must ingest day after day, why aren't all the raptors dead in the entire country?   We read about the effects of lead shot in America and Argentina seems to be growing populations of raptors with lead shot!!

I am fortunate to have gone on the trip and thankful for such good friends who made the memories and laughter so great.

And to Argentina, thank you too.  I hope one day you elect honest leadership and are able to become a South American powerhouse.  And to the doves of Argentina, may you continue your torrid pace of breeding and raising so many broods year after year.  It is truly unbelievable until you see it for yourself!