DALLAS - PETA has a message and it can be seen on a new billboard in Dallas right now.
The billboard shows a cow lying in between a couple that appears to be uninterested in one another. "Meat interrupts your sex life" is written next to the picture with a description that says, "Meat and dairy clog your arteries and can lead to erectile dysfunction."
According to PETA, the ad aims to remind Dallas residents that consuming meat "can have a major impact on what happens-- or doesn't happen-- in the bedroom."
You'll find this billboard on I35 east off of exit 429D.
"There's nothing sexy about animal suffering and clogged arteries," says PETA Executive Vice President Tracy Reiman. "PETA's cheeky billboard will have Dallas diners swapping that deadly date-night steak for a vibrant veggie burger in a heartbeat."
PETA tried to run the ad at Trinity Groves mall, but the facility's media company said no to the campaign because the area is best known for its restaurants and the message was too controversial.
The organization says they are running similar ads featuring a pig in North Carolina and another featuring a chicken in Georgia later in the month. 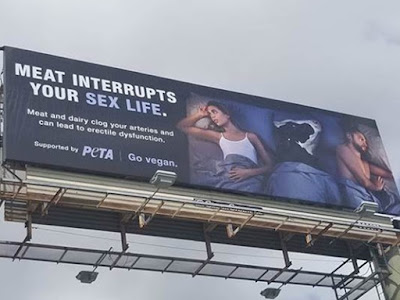