I’ve been a bow hunter for a long time; I just took a long time off. As a kid on my grandparent’s farm near Hancock, MN I played “Indian” with a long bow. It was good training in trying to sneak up on rabbits and squirrels and fire off an arrow. While in college I shot a Ben Pearson recurve.Fast forward to 2008. With the difficulty in obtaining rifle tags for deer and elk in many states I made the decision to start bow hunting again. I’m not alone. Shut out of the fall big game rifle season in Montana, a pal and I put in for antelope archery tags. I ordered a couple of Hoyt Katera’s for my son, Hunter, from my friend at the Outdoor Connection in Crossville, TN to get back in the groove. Shooting 60 pounds of draw we enjoyed some good practice sessions this summer. A buddy of mine from Georgia and I were successful in the antelope archery draw and we headed to Montana with high hopes of ventilating a great “speed goat”. Having shot plenty of antelope during my high school days on various Indian reservations I grew up on and having helped raise a baby antelope on the ranch I worked on while in high school near Ismay, MT I knew antelope and their unique behavior. Bow hunting them is tough and this hunt was without a doubt one of the most challenging and frustrating hunts I’ve been a part of.It started with a 4-hour flight delay on DELTA (Don’t Ever Leave The Airport) and on arrival into Billings, MT we hit the Wal-Mart for a list of vitals and vittles. On the drive out to the east central Montana ranch we were staying at we only saw 1 antelope when all the years of making that trip we would see hundreds of animals. Last fall (2007) I literally saw hundreds of dead antelope on a large property north of Ingomar, MT. 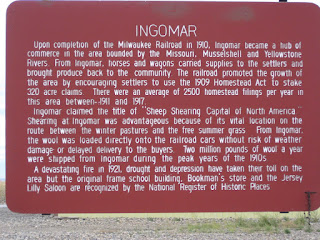 The dead antelope were victims of EHD, the disease that took about 75% of the whitetail deer population on the river between Melstone and Roundup. Those antelope carcasses were a smorgasbord for so many Golden and Bald eagles. It was special to see both species sitting on carcasses and feasting together. I was able to obtain access to approximately 16 sections of private ground and we met the rancher on Day 1 in the local café for maps and permission slips. Eastern Montana this year is literally covered up with clover and grasshoppers. Trillions of hoppers to be exact. You couldn’t take a step without a dozen rising up and out of the grass to “fly” and “buzz” out of the way. We were pre-rut with some minor “chasing” just beginning to get going. Antelope numbers were down by half at least in my guesstimate and that of the rancher so we knew we had our work cut out. Stalking antelope in the hills is tough. Their eyesight and wary nature didn’t allow for mistakes. It was our intention to split up and head off in different directions to try and locate a bedded buck that was “stalkable”. You have to find them before they see you. 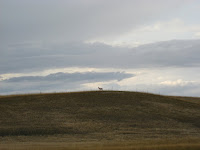 In stalking antelope that are bedded, wind is your friend. As a bow-hunter, it’s not a real close friend. The sun was bright and the wind a steady blow out of the northwest. I had glassed a bedded buck about a mile off to the southwest in a sage bottom. About half way there, crossing a nice cut, just sheer chance, a sixth-sense, call it what you want, I took a glance over my shoulder and saw a brown patch that didn’t look right---putting my Kahles 8x32’s up it was a great buck bedded alone facing into the northwest wind away from me. I dropped into the gully (gully’s are your best friend in this part of Montana for bow hunters) and kept low. I had probably 500 yards to cover. I creeped up to where I figured he would be near but no antelope. I didn’t move, just slowly looking for the black horns or white hair that would give him away. I moved slowly, not showing myself and through some sage brush glassed him, still looking up into the draw to the northwest and away from me. I was fearful of two things, one, swirling wind to let my scent get to him and two, clouds of grasshoppers that if detected by him, could mean a predator was moving in close. I eased up within 40 yards, the hot wind gusting. I laid back trying to make the decision of what to do. Try to take him lying down or wait until he stood up knowing that at such close range he would be full-tilt in a nanosecond thinking that wind would blow my cover at any second. 99% of my practice distance was at 40 yards or better. My patience wore thin. My daily practice regimen didn’t include kneeling shots in a strong wind on a steep incline. I came to full draw, knowing I had to get my pin on him pronto as I crested the sage. Unfortunately, for whatever reason the buck had turned in his bed and was looking straight at me when I came up. I needed another 2 seconds, maybe 3. It wasn’t to be. So close, so far. What a beautiful animal. That’s hunting.The next couple of days were more of the same. Lots of sweat, dusty miles, glassing and busted stalks. 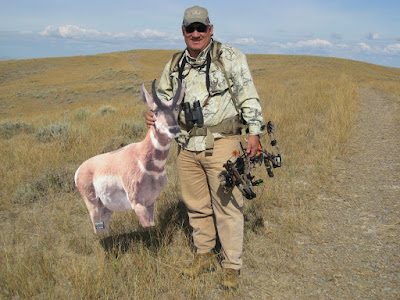 I had 2 shots over the next couple of days, one arrow missing as the buck went to a trot from a walk at 47 yards (which looked to be 27 yards, the distance so deceiving in the MT air), the other arrow sailing inches under the “boiler-room”, it’s tough holding steady in the wind. The difficulty was finding bucks in stalkable beds without a doe group present. Those eyes are lethal when together and if you know antelope you know bucks use those does for protection. Out of all the miles I covered I saw only 1 diamondback---what a nice “buzz” he had. 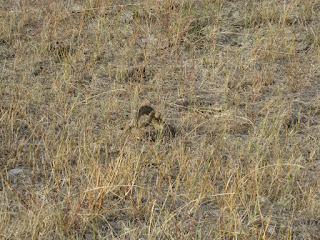 The ground I was on had water galore and I didn’t have the luxury of time in patterning water holes or stock tanks. The sights of prairie Montana never grow old, sandhill cranes, avocets, sage grouse, porcupines, red fox, eagles, mule deer, howling coyotes and a trillion stars at night. Watching marsh hawks and sparrow hawks work the wind for mice is always a treat. On Day 4, either my hard work paid off or I got lucky, maybe a combination of the two. One of the facets of my shooting practice was to hurriedly get an arrow out of my quiver and on the string quickly for another shot. That practice made the difference. This mid-day stalk started with spotting a small herd and working around the other side of them to come upwind. I had excellent cover for once and the herd was feeding toward me. One time they ran back 60 yards and looked around but some does turned back toward me and continued to feed and the buck was bringing up the rear. I had great cover in some yucca plants to see through and just laid back to let them get in close. As they approached my range finder told me about 35 yards. I mentally rehearsed what I had to do, came up slow and “pinned” the closest animal. Timing is everything and all I can say is that in the nanosecond between release and the Easton carbon getting there the animal moved. I missed. The herd snorted but didn’t run. I ducked, well hid, knocked another arrow and sat tight. I knew I had a “now-or-never” shot on the closest animal. My release felt good and the orange fletching buried into the animal. Hunching and walking slowly, it was about 60 yards before going down the first time. 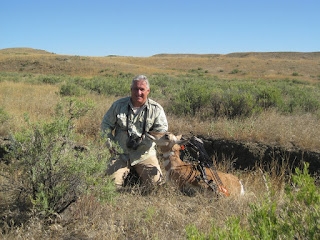 What would I do different on this hunt? Several things. One, go later to catch better rutting/chasing activity and have bucks far more decoyable. Two, scrap the Cabela’s bought decoy for one from the Montana Decoy Company. Three, practice making contorted kneeling shots on inclines. Four, invest in better camo rain-gear. Five, adapt my Badlands fanny pack to carry my bow and get the weight off my arm. My pal arrowed an antelope as well to make for another memory-making hunt.At 54, I need to keep my health intact to keep making memories, realizing my Creator has everything to do with that. I know I’ll get my share of animals ahead it’s the frustration of the “so-close, so-far” that differentiates bow hunting from rifle hunting. God willing, I’ll have plenty of time in the western prairie country I love among some of the finest, friendliest people I have ever known. Their spirit, positive outlook and determination are what any good antelope archer needs. I hope some more Montana grit rubbed off on me on this trip. May there be many more hunts ahead with my sons.
_________________________
at 9/22/2008 10:52:00 AM