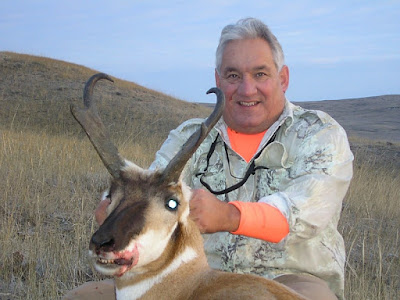 The Montana 2009 rifle "speed goat" opener opened under cloudy skies and cool temperatures. In fact the temp never broke freezing the entire time we were in Montana. It was a vast change from 2008 when I tagged out with stick n string and was fighting heat and grasshoppers in early September, pre-rut. This was a great hunt with a great friend and may there be many ahead of us. The 2007 EHD ("blue-tongue) carnage took so many antelope in this unit that doe/fawn tags were not being issued so were only able to take our two bucks. Maybe next year!

For those who asked about what is around my neck, I keep a range finder in one pocket and my Garmin GPS in the other to keep them handy and hold the weight off my neck. I shoot a Browing BAR .243 (why anyone would shoot anything else is beyond me for antelope and whitetails!) and used a 95 grain Hornady at 231 yards. And yes, I was splatterd by antelope blood when I field-dressed him.
at 10/15/2009 02:04:00 PM