Bob was my first boss in San Diego.  The time was 1979.  He was a good boss, a great man. Bob never had to take me to all of those San Diego Clipper games but he did. I learned many things from him that I had never been exposed to and that I carry with me to this day.

La Jolla J. Robert Winegardner, a prominent insurance executive, passed away March 28, 2016.He was raised in Hollywood and attended Hollywood High and U.C.L.A., where he was a member of Delta Tau Delta fraternity. He served in the Navy in World War II and Korea and his last duty was as Supply Officer of the USS Atlas. He retained his commission in a retired reserve status until his death.Associated with the Northwestern Mutual Life Insurance Co. of Milwaukee for over fifty years, he was General Agent for the company in San Diego before retiring in 1979. Prior to coming to San Diego in 1961, he was sales leader in the Los Angeles agency when that agency was also the number one agency in the country. He became a life member of the Million Dollar Round Table of the National Association of Life Underwriters in 1959.In San Diego he was President of the General Agents and Managers Association, President of the Chapter of the American Society of Chartered Life Underwriters and President of the San Diego U.C.L.A. Alumni Association.An avid tennis player he had belonged to the La Jolla Beach and Tennis Club and played in many local tournaments. He kept alive, as long as possible, a La Jolla tradition of weekly English pocket billiards at his home with many friends.He is survived by his wife of 69 years, Virginia; daughters Susan Daly (Lance), Nancy Ivey (Bill), Joanne Joby Bakken (Kyle), all of San Diego. Janet Winegardner of San Francisco.

Now let me tell you about Bob Winegarder.  He liked hustle.  He liked a positive attitude.   On a side desk, prominently displayed were many bits and pieces of paper full of great quotes.  Quotes that were motivating and inspirational. Here is a quote that Bob handed to me in 1979.

It's been on alot of desks and sits prominently on a computer in my office to this day. 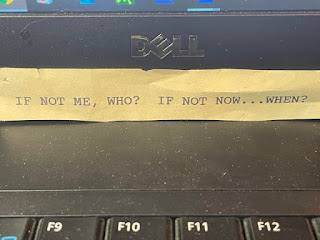