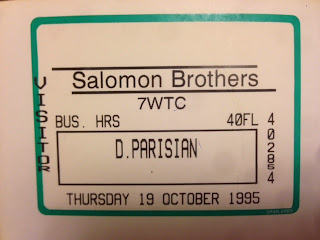 I was told that Salomon trading floor at 7 World Trade was a den of thieves.  If a quarter got loose it was a brawl.  I had a chance to visit the mammoth floor on the 8th anniversary of the Big Crash.   It reminded me of a row of brokers offices in the Drexel Burnham Lambert office in LaJolla.   We called it "murderers row" for lack of a better term.  I don't think it mattered, the clients got twirled.  In fact there was one broker who would sell open-end fixed-income mutual funds and at the same time as he wrote up the "buy" ticket he would write up the "sell" ticket!     The office manager at the time, Walter J. Shaw, did his best.   He wasn't the finest branch manager I ever worked with and far from the worst, but he never tossed his guys under the bus.

The best branch manager I ever worked with was David B. Utter.